The myth and the evidence

Being somewhat left-handed myself, I am rather interested in the “Devil’s hand.” While it is clear that in the tight ranks of pikemen and musketeers everyone must conform to the right-handed majority, it is less obvious to me that this would be universally applicable. In particular, as Robert Heinlein noted in his science fiction classic Glory Road, the left-handed swordsman has a natural advantage. He is quite used to the foibles of the right handed majority, but they in turn have little experience with southpaws. So I decided to look into whether there actually were left-handed swordsmen in the Clann Tartan period. An actual advantage in combat usually trumps cultural taboos.

The Gazetteer for Scotland‘s Overview of the Kerr family of the Scottish border notes that:

This trait [left-handedness] became a notable characteristic of the family when the naturally left-handed Sir Andrew Kerr had found it useful at the Battle of Flodden (1513) and had trained his supporters to follow suit. Several of the Kerr family homes, for example Ferniehirst Castle, are adapted for use by left-handed individuals.

Electric Scotland also has a note about the Left Handed Kerrs:

The expression “Kerr-handed” and “corry-fisted” both refer to the well-established tradition of left-handedness within the Family. This probably goes back to Andrew Kerr, father of the first Sir Thomas, who was natuarally left-handed and found it useful in battle. [….] Andrew Kerr therefore taught his sons and armed men-servants (who in accordance with custom took the family name on joining the household) to wield the sword or the Jethart Axe with the left hand, and they in turn taught their sons. The family was thus unique — certainly in Scotland and probably in the modern world — in converting natural right-handers to left-handedness, the reverse procedure being far more usual, though parents and teachers are now strongly advised against it. Ferniehirst is designed for left-handers to live in, as are several other Kerr houses. The only other well-known instance of deliberately cultivated left-handedness were the tribe of Benjamin in Ancient Israel, with a reputation in other aspects very similar to ours: “Benjamin shall raven as a wolf: in the morning he shall devour the prey and at night he shall divide the spoils.”

Alasdair MacColla’s father, Coll Ciotach, was one of a long line of powerful Gaels in Clan Donald. A Hiberno-Scot MacDonnell on his father’s side and an O’Cahan on his mother’s side, he was forced into exile to the Isle of Colonsay as an infant, by the political machinations of the MacDonnells of Dunluce. Like most Gaels of the time, his second name was not a surname, but a description of lineage or some outstanding feature of appearance or character. The Gaelic word ciotach (pronounced keetoch) in this application denoted ambidextrousness. A feature Alasdair shared with his father (particularly relating to swordsmanship). MacColla simply means son of Coll.

There seems to be some confusion about whether Coll Ciotach was ambidextrous or fully left-handed, but that is not particularly significant for this discussion.

According to tradition, Alasdair had been invited by [Sir Duncan Campbell, Lord] Auchinbreck to a banquet at Dunluce. A messenger, mistaking Alasdair for Auchinbreck, delivered a note to Alasdair intended for Auchinbreck. The note instructed Auchinbreck, on Argyll’s order, to kill Alasdair while he was unarmed and feasting. Knowing this, Alasdair appeared at the feast with his men armed. Confronting Auchinbreck, Alasdair refused to surrender his sword (as was customary under the Gaelic law of hospitality). Auchinbreck asked him why he would not surrender his sword. Alasdair replied, because it is the strongest hand in Ireland. Auchinbreck then asked what the next strongest hand was. Demonstrating his family’s reputation for ambidextrousness, he transferred the sword to his left hand. He then revealed his knowledge of the plot against his life and fled with his men.

We can also look at the Penicuik sketches, eyewitness drawings from the Culloden campaign. This is long after the Clann Tartan period, but still relevant; culturally the 17th century did not end in the Highlands until 1746 (see Grant and Cheape, Periods in Highland History). 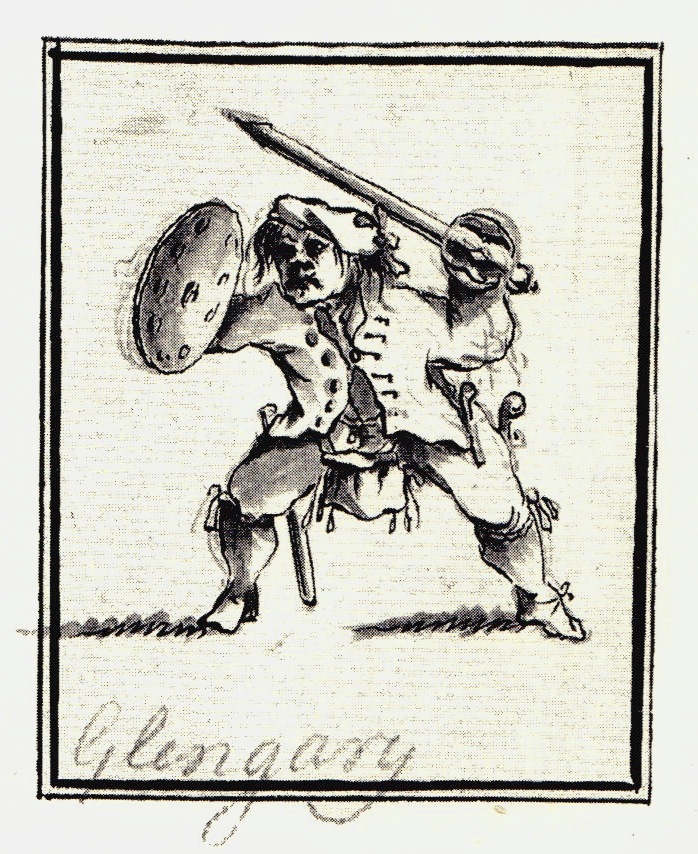 Angus McDonnell, second son of the chief of Glengarry.

It is interesting that we have a prominent MacDonald lefty in the 1640’s, and a century later two more high ranking southpaws in other branches of the same clan.

Left-handed swordsmen were not limited to Scotland. The introduction to Pallas Armata, a 1639 arms manual, begins:

Pallas Armata: The Gentleman’s Armorie; Wherein the right and genuine use of the Rapier and of the Sword, as well against the righthanded as against the left handed man is displayed:

The tone is quite matter of fact: The lefty is treated as a technical problem to be solved, not as a demonic manifestation.

Looking back to an earlier era, apparently there were also left-handed Vikings.

Note on my handedness, espcially for my fellow science fiction fans

I write left-handed, but I throw and hit mostly with my right hand. For a long time I wondered how to identity myself, but eventually science fiction came to my aid. I read The Mote in God’s Eye and it all became clear: I was a Motie who happened to have only one left arm. OK, but what kind of Motie? That has changed over the years. Early in my working life I was a technically oriented computer programmer, so I was obviously an Engineer. As my career progressed, while still doing a lot of technical tasks, I worked more with the business users of computer systems, and did quite well at that. So I was becoming a Mediator. For the last two decades of my career I was a Data Base Administrator. That definitely made me a Keeper.